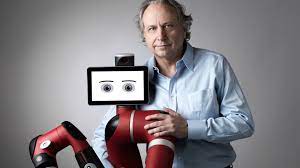 Rodney thinks the Baxter Robot could have more successful if they had kept to a $3000-5000 price target.

iRobot was founded in 1990 by Massachusetts Institute of Technology roboticists with the vision of making practical robots a reality, iRobot has sold more than 30 million robots worldwide. They introduced the first practical home robot with Roomba, automating home vacuuming.

They developed some of the world's most important robots. Its robots have revealed mysteries of the Great Pyramid of Giza, found harmful subsea oil in the Gulf of Mexico, and saved thousands of lives in areas of conflict and crisis around the globe. iRobot inspired the first Micro Rovers used by NASA, changing space travel forever, deployed the first ground robots used by U.S. Forces in conflict, brought the first self-navigating FDA-approved remote presence robots to hospitals.