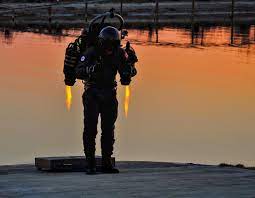 Today, the company announced its very first jetpack sales: two JB-12 units, which sold for US$400,000 apiece to an "undisclosed military customer in South-East Asia," deliverable within about six months.

Images of the JB-12 jetpack itself are classified at this stage, but like the current model JB-11, it uses three small Jetcat turbines per side. Mayman told us in 2019 that this time, the jets are configured in a triangle, rather than a line. It's triply redundant, from the new flight computers to the jet engines, giving pilots an excellent chance of surviving a failure in one or two systems. And yes, flight computers; the JB-12 is likely getting considerably smarter and more idiot-proof than JPA's previous jetpacks, which have very much been manual affairs.