> Talk about a room with a view! SpaceX shares a mesmerising video of the domed window... - pirateswithoutborders.com

Talk about a room with a view! SpaceX shares a mesmerising video of the domed window... 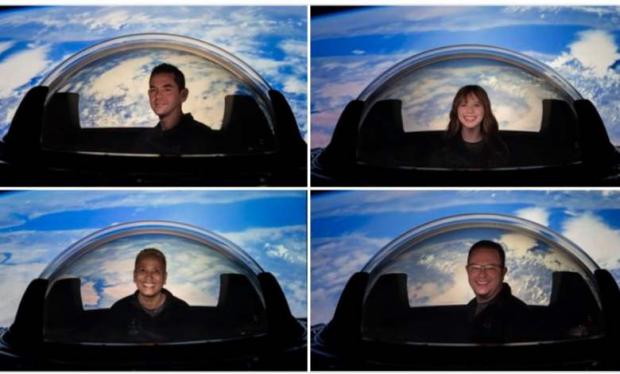 SpaceX has shared a stunning video of the domed 'cupola' window on its Crew Dragon capsule, as its first all-civilian crew began its three-day orbit of Earth.

Taking to Twitter, SpaceX simply wrote: 'View from Dragon's cupola,' alongside the video of the domed window, with Earth in the background.

The Inspiration4 crew - including Jared Isaacman, Hayley Arceneaux, Sian Proctor and Chris Sembroski - launched into space shortly after 8pm EST on Wednesday (1am BST on Thursday) from the Kennedy Space Centre in Florida.

Shorty after the launch, the bottom part of the rocket detached and headed back down to Earth on a seafaring platform to be reused at a later time by SpaceX, as part of the company's plan to save money and make spaceflight cheaper.

Although this is not the first time civilians have travelled to space, Inspiration4 is the first mission manned solely by civilians.

The crew began their journey at 4:07pm ET, when the four individuals emerged from Hangar X where they were met by a large crowd cheering them on.