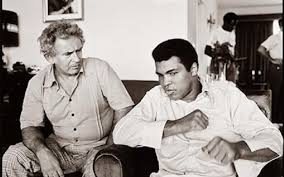 The book is about the 1967 anti-war protest at the Pentagon and, more broadly, the factionalizing unrest of that period and how Vietnam fueled it. It also explores how the quiet or mostly quiet acquiescence to horrors abroad, horrors carried out by U.S. troops in the name of an entire democratic nation, degrades a society. At one point, the narrator imagines himself encountering "Grandmother, the church-goer, orange hair burning bright" at a slot machine in Las Vegas. "Madame, we are burning children in Vietnam," he tells her. "Boy, you just go get yourself lost," she replies. "Grandma's about ready for a kiss from the jackpot."

The book turns its lens on the left as well, even on the anti-war protesters marching on the Pentagon. In its violent climax, as soldiers bludgeon young demonstrators in the night, Mailer cites an account that appeared afterward in the Washington Free Press, a newspaper founded by campus radicals.