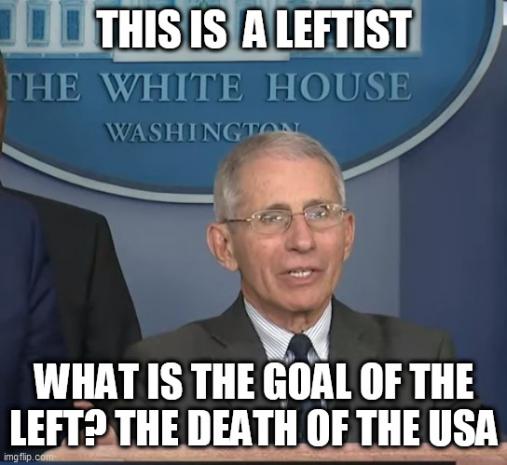 Heading the National Institute of Allergy and Infectious Diseases (NIAID) since 1984, Fauci has been responsible for incalculable harm to countless millions of people at home and abroad.

Throughout his public life, he's been indifferent toward public health, welfare and safety.

More con artist than medical professional, his agenda pushes the Biden regime's diabolical agenda, along with aiding Pharma profiteering and his own self-enrichment.

Dedicated to destroying public health, he's never been its defender.

Unlikely ever to admit what's indisputable — one of his specialties, publicly and privately — he'll "continue to dissemble, and try to work around the truth, and massage the truth."

"He should be fired, Paul adding:

"We're calling for an investigation and hearings on this. We've been calling for that for months."

On national television, he lied saying he never "misled" the public — what he's infamous for repeatedly.

Nothing he says is credible. Everything he does and says is with diabolical aims in mind.

The same goes for others involved in the most diabolical plot against humanity of all time.

Available for purchase on November 16, Kennedy posted an excerpt on his Children's Health Defense website, saying:

MSM and Dems "beatified a man (responsible for many years of public health) atrocities…elevating (a criminal to) secular sainthood."

"At worst, he is a sociopath who has pushed science into the realm of sadism."

Indisputable evidence supports this conclusion, but his true demonic measure is far worse.

Not only did he sign off on torturing animals for Pharma profiteers and his own self-interest, he and complicit sadists OK'd millions of dollars for numerous "demented and inhumane experiments."

"From what moral wilderness did the monsters who devised and condoned these experiments" arrive on the public stage?

"How have they lately come to exercise such tyrannical power over our citizens" — with the worst of evil intent in mind?

"What sort of nation are we if we allow them to continue?"

"(D)oes it not make sense that the malevolent minds, the elastic ethics, the appalling judgment, the arrogance, and savagery that sanctioned…barbaric brutalization of children…and torture of animals for industry profit, could also concoct a moral justification for suppressing lifesaving remedies and prolonging" what's easily controlled and eliminated by known safe and effective meds.

Kennedy quoted Dwight Eisenhower's warning about a federal bureaucracy for ill, not good,  in his farewell address, saying:

Research is "central" in the US.

It's also "formalized, complex and costly."

"A steadily increasing share is conducted for, by, or at the direction of, the federal government."

"Today, the solitary inventor, tinkering in his shop, has been overshadowed by task forces of scientists in laboratories and testing fields."

"In the same fashion, the free university, historically the fountainhead of free ideas and scientific discovery, has experienced a revolution in the conduct of research."

"Partly because of the huge costs involved, a government contract becomes virtually a substitute for intellectual curiosity."

"The prospect of domination of the nation's scholars by federal employment, project allocations, and the power of money is ever present and is gravely to be regarded."

We "must…be alert to the danger that public policy could itself become the captive of a scientific technological elite."

Calling for entrusting public service  to responsible officials, he added:

"It is the task of statesmanship to mold, to balance, and to integrate these and other forces, new and old, within the principles of our democratic system — ever aiming toward the supreme goals of our free society."

Fraudster Fauci is polar opposite what Eisenhower called for — the epitome of hostility toward what just societies hold most dear.

For nearly 40 years on the public stage, he diabolically "used his control (over) billions of dollars to manipulate and control scientific research to promote his own, and NIAID's, institutional self-interest and private profits for his pharma partners to the detriment of America's values, her health and her liberties," Kennedy explained.

Severely punishing him for unforgivable high crimes against humanity is the only option.

The urgency of action — including against his co-conspirators — needs no elaboration at a time when toxic jabs harmed millions.

Unless halted, the health and lives of humanity is gravely threatened by the highest of high crimes that continue daily throughout the US/West and elsewhere.

Kennedy and Meryl Nass MD said the following on Monday:

CDH is suing the Pharma-controlled FDA for permitting children aged 5 - 11 to be jabbed with toxins designed to destroy their health — on the phony pretext of protecting it.

CHD seeks accountability "for recklessly endangering this population with a product that has little efficacy but which may put them, without warning, at risk of many adverse health consequences, including heart damage, stroke, and other thrombotic events and reproductive harms."

With US federal and state courts stacked with pro-toxic mass-jabbing extremists — including the Supremes — CHD's lawsuit is likely DOA, despite its honorable intention.

Whatever the outcome of its lawsuit, make no mistake.

A special place in hell awaits the likes of fraudster Fauci and co-conspirators involved in the most diabolical plot ever conceived against public health — with pure evil intentions in mind.