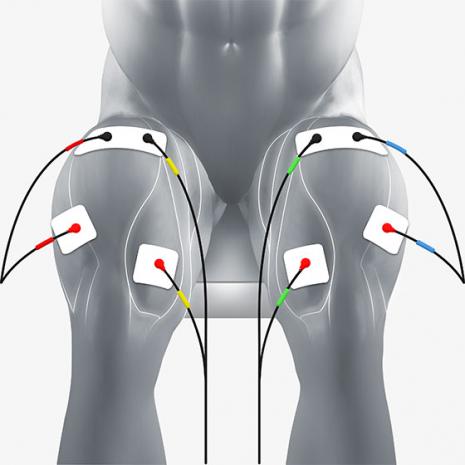 Although traditional electrodes do provide accurate readings, they can be both expensive and uncomfortable, plus they may fall off as the wearer moves around – the latter is definitely an issue if you're trying to monitor an athlete's performance.

Seeking a cheaper, comfier and more reliable alternative, a team led by the University of Utah's Prof. Huanan Zhang started by depositing a microscopic layer of silver onto ordinary cotton/polyester-blend fabric.

Although silver is electrically conductive, it can also be toxic to human skin. For that reason, the team added a similarly thin and flexible layer of gold to the silver. Doing so not only kept the silver from contacting the wearer directly, but it also increased the material's overall conductivity. And while a thicker layer of nothing but gold would also work, combining it with less-expensive silver helps keep costs down below those of conventional electrodes.

In a test of the technology, the silver/gold coating was applied to select areas of a compression sleeve. That sleeve was then placed on a volunteer's forearm, plus electrical wires were run from the coated areas of the garment to a portable electromyography device.

When the person subsequently performed different actions, the sleeve accurately detected the electrical signals produced by their forearm muscles as they contracted. Additionally, the coated areas retained their functionality after the sleeve had gone through 15 wash cycles in an ordinary washing machine.