> Lesson in joyful, smiling courage! Teacher Kath who lost all four limbs to sepsis and was... - pirateswithoutborders.com 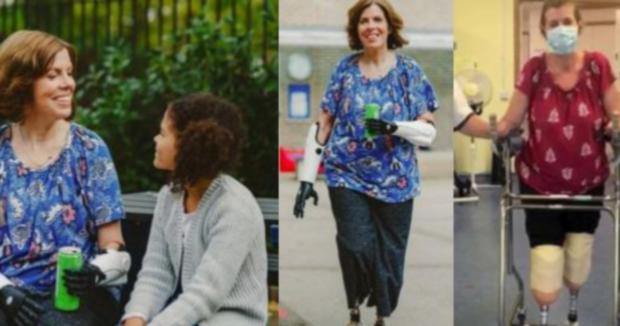 Children are quick to find nicknames for their teachers — the cheekier the better. But Kath Tregenna is thrilled with hers. And for good reason.

To her young pupils at the International School of London who clearly adore their smiley, vivacious teacher, Kath is quite simply the Bionic Woman.

It's testament not simply to the amazing pair of bionic arms Kath now sports, but to the extraordinary spirit which has seen her return to work despite having all four limbs amputated.

Almost exactly two years after her family were summoned to come and say their goodbyes to her in hospital, Kath is back doing what she loves best.

And thanks to her amazing arms, she does everything from driving herself to school to writing on the whiteboard and coming up with fun maths activities.

She's not only had to learn how to use the so-called Hero Arms, which have clever sensors that can detect the tiniest muscle signals and turn them into hand movements.

She's also had to teach herself to walk again on prosthetic legs — and all while caring for her two children: Aaron, 12, and eight-year-old Emily.

'I know life can never be exactly the same,' says Kath, 47, who lives in Datchet, Berkshire with her partner, Alvin, 48, a carpenter, and their children. 'But I refuse to look back. After coming so close to losing everything, I am just so overwhelmingly grateful to be alive.'