> Earth to Jupiter Via Magsail in 21 Days and Neptune in 18 Weeks - pirateswithoutborders.com 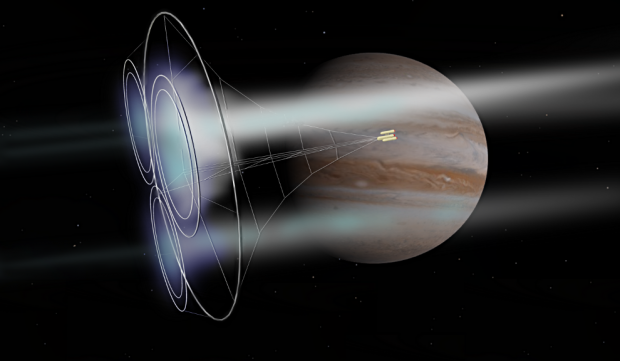 Nextbigfuture notes that the design looks very simple and achievable. If it works then by 2030s we would be able to mass produce probes by the thousands to explore the solar system and sending out telescopes to the gravitational lens point would give direct high-resolution imaging of exoplanets in thousands of solar systems.

The Plasma Magnet [PM] required relatively little energy and yet was capable of propelling a much larger mass at a velocity exceeding any current propulsion system, including advanced solar sails.

The Plasma Magnet was proposed by Slough. It arranges coils to use solar wind ions to induce a very large magnetosphere that is propelled by the solar wind. Unlike earlier proposals for magnetic sails that required a large electric coil kilometers in diameter to create the magnetic field, the induction of the solar wind ions to create the field meant that the structure was both low mass and that the size of the resulting magnetic field increased as the surrounding particle density declined. This allowed for a constant acceleration as the PM was propelled away from the sun, very different from solar sails and even magsails with fixed collecting areas.