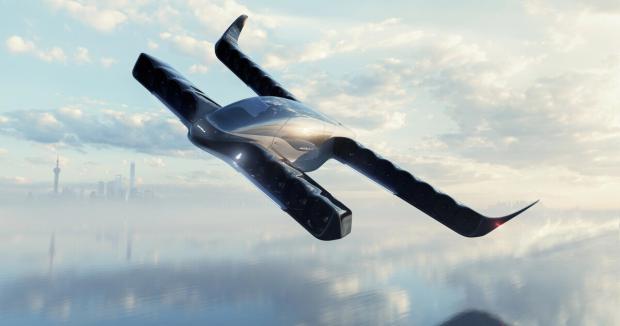 The manta ray shape, the large rear wing with upswept tips, the front canards, the great banks of small electric jets arranged along the wings ... much of Pantuo's concept might be hard to tell apart from the beautiful Lilium Jet from Germany.

But there are key differences here. Where Lilium tilts only its propulsion pods, the Pantala is designed to tilt its whole wings. Where Lilium is running 36 tiny electric jets and pushing a small fan philosophy, Pantuo is hedging its bets with just 22 fans, each with a much larger diameter.

The benefit of larger fans, Lilium tells us, is more energy-efficient hover. The drawbacks are tougher scaling, more noise, and less efficient cruise thanks to a bit of extra drag in horizontal flight. So if this thing gets built, perhaps we'll get a chance to verify those claims.

Performance figures won't be immediately comparable, since Pantuo is running a standard five-seat cabin while Lilium has expanded its launch aircraft to a seven-seater. But Lilium promises a 250-plus km (155-plus mile) range at 280 km/h (175 mph), and Pantuo says the Pantala Concept H will match that range, but go faster than 300 km/h (186 mph).

That's about all the detail we've got at this stage. It should be stressed that Lilium is one of the eVTOL world's most advanced projects, with several hundred million dollars in the bank, several hundred employees, and multiple flight tests of multiple prototypes under its belt, to name a few of its achievements. Pantuo has some ripping renders here, but if they've so much as built a remote control prototype, they're not telling anyone at this point.