> World's tiniest camera -- the size of a grain of salt -- created by scientists - pirateswithoutborders.com 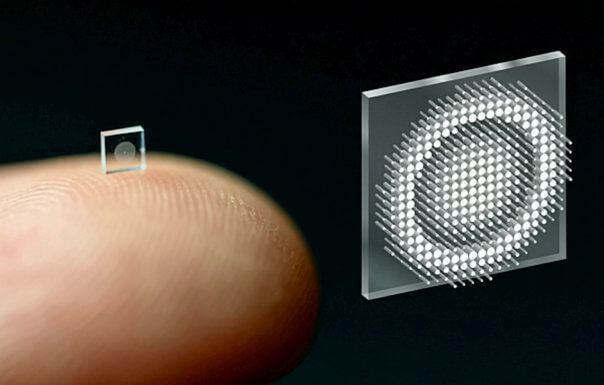 Computer scientists from Princeton University and the University of Washington say the small device they created can take crisp, full-color pictures just as well as conventional cameras which are 500,000 times bigger.

The new technology may help doctors to diagnose and treat diseases far less invasively than traditional endoscopy can today. It will also make imaging better, as thousands of tiny devices could cover the whole surface of a smartphone to become one giant camera — instead of mobile devices needing three different cameras to take pictures.

Traditional cameras use several curved glass or plastic lenses to bend light rays into focus, but the new device uses a "metasurface" which developers can make just like a computer chip. The metasurface is just half a millimeter wide and is made up of 1.6 million tiny posts, which are all shaped like cylinders but none of them look exactly the same.

When the antennae-like tiny posts interact with light, with the help of algorithms, they produce better pictures and capture a wider frame of view than any full-color metasurface camera created so far. The metasurfaces are made from silicon nitride, a glass-like material which can be manufactured easily and produced more cheaply than lenses in conventional cameras.

Senior study author Dr. Felix Heide notes that a key innovation during the camera's development was figuring out how to combine the design of the optical surface with the signal processing algorithms that make an image.

The team adds that this integrated design boosted the camera's performance in natural light. Previous metasurface cameras have required the pure laser light of a laboratory or other ideal conditions in order to create high-quality images.