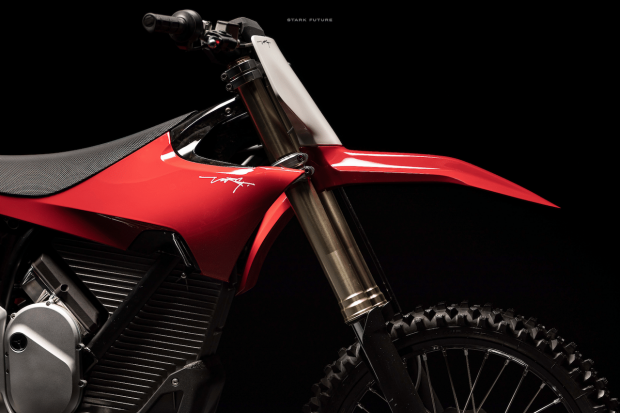 That right there, folks, is a promise of world domination – but looking at the spec sheet, we sure wouldn't want to line up next to the Stark Varg on a 450.

The Varg weighs 110 kg (242 lb), which makes it 11 kg (24.2 lb) heavier than the FIM's minimum weight for an unfueled MXGP racer. So it is a tad on the porky side compared to international-grade racers, but that gap shrinks once the fuel goes in, and the Varg more than makes up for it when you open the throttle.

Peak power is an epic 80 horses. To put that in context, the most frightening dirt bike I've ever ridden was the KX500, a 500cc Kawasaki 2-stroke that delivered somewhere around 66 horses in a manner I found rude, inconvenient and unlikely to help me live until a ripe old age in the company of all my original limbs.

Peak torque is an equally nutty 275 Nm (203 lb-ft) at the motor, and with the magic of gearing, that becomes a frankly hilarious 938 Nm (692 lb-ft) at the rear wheel. Suffice to say, the Varg will probably wheelie if you ask it nicely. It may even tow a caravan.

Stark isn't here solely to proliferate widows and orphans. The bike will have five modes installed at any given time, but you can customize up to 100 modes on the phone app and swap them in and out whenever you like. These modes allow you to customize the "exact settings of the power curve, engine braking, traction control and the patent-pending virtual flywheel," in order to make the bike feel and respond like anything from a 125cc two-smoker, to a roaring 450 four-stroke, to something wilder than anything else on the market. Stark calls it a "gentle beast" approach, that can make the bike as friendly to newbs as it is fearsome to gods.

The dash of the bike is a waterproof, detachable smartphone, into which you can pop a SIM card if you want full connectivity. This also acts something like a key; the bike won't unlock without the phone clicked into the dash. Either way, you'll want to keep a good eye on it, like you would with any half-decent dirtbike.