Can Spinlaunch Throw Rockets Into Space? 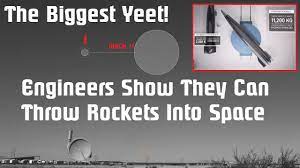 I talked about Spinlaunch a few years ago, they wanted to reduce space launch costs by throwing the launch vehicles out of a spinning launcher at hypersonic speeds. I was somewhat skeptical as to the chances of solving the engineering problems inherent in this, but recently they demonstrated a mach 1 launch using their 1/3 scale launcher, so they're already making progress on developing a viable launch syste,