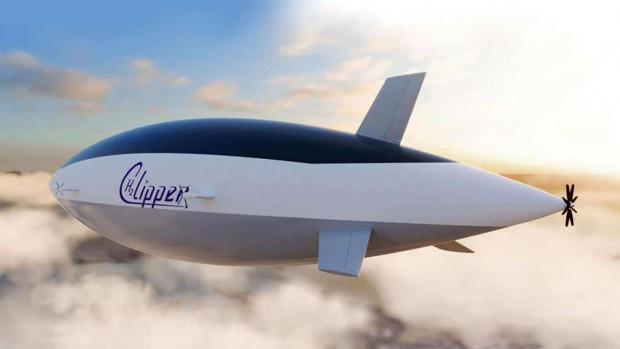 Its lift gas would be hydrogen – providing some 8 percent more lift per volume than helium at something around 1/67th the price. Its propulsion would be fully electric, running on liquid hydrogen put through a fuel cell. H2 Clipper says it'd operate efficiently for missions ranging from under 500 miles (804 km) to "well over 6,000 miles (9,656 km)." That would link any two points on the globe with a single fuel top-up. In the current renders, the company shows the top of this huge aircraft covered in photovoltaic cells, which could theoretically enable it to generate its own hydrogen, if it were to carry a water source and an electrolyzer.

With the right provisions put in place, it could take goods right from a factory to a distribution center without needing additional ground transport stages to and from airports, thanks to its vertical takeoff and landing capabilities.

H2 Clipper says the economics will be attractive as well, estimating costs between US$0.177 to $0.247 per ton-mile for distances between 1,000-6000 miles. It says this is a quarter of the price of today's air transport. Certainly, it'll still be more expensive than sending things on a container ship, but it does potentially cut out additional logistics challenges at either end – and the shipping sector's emissions issues could well see it slapped with carbon taxes as the race to zero carbon by 2050 develops globally.

On the surface, it all looks to work pretty neatly. Of course, there's a large elephant in the room here, or at least a huge manatee: hydrogen, along with any other flammable substance, is currently prohibited as a lift gas in the United States and Europe, due to some high-profile dirigible disasters in the early 1900s, burned into the public consciousness by newsreels of the Hindenburg conflagration in 1937 that killed 35 of the 97 people on board.