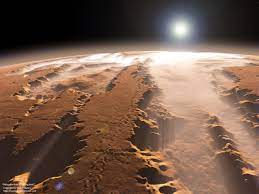 The Trace Gas Orbiter (TGO) has detected an area about the size of the Netherlands where water could make up as much as 40 percent of the material near the surface.

While Mars is believed to have once held huge oceans on its surface, today it's drier than any Earthly desert. But there likely is still water on the Red Planet – mostly around the poles as ice, or potentially in salty liquid lakes deep underground, although the evidence is mixed on the latter idea.

Closer to the equator, smaller amounts of water have been detected in the soil near the surface, in the form of either ice or hydrated minerals. But the newly discovered cache is far bigger – and far wetter – than anything else found so far.