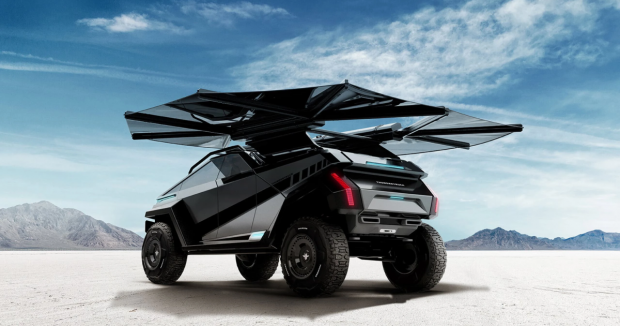 Oh, and if you need extra range, you can snap two extra wheels and a battery onto the back of it with a self-balancing caboose that makes it a six-wheel-drive.

First things first: Thundertruck is the brainchild of a Los Angeles "creative consultancy," conceived mainly as a way to keep the team busy during the first wave of COVID lockdowns. "Instead of baking bread or making puzzles," says the Wolfgang L.A. team, "we decided to make a new state-of-the-art EV truck."

So while Wolfgang says it "has the ability to support an entire product development program, from research and strategy to initial sketches and first prototypes, all the way to advertising launch campaigns and content creation," it's fair to say it's unlikely we'll be seeing the Thundertruck out bush-bashing or crushing hillclimbs any day soon.

Still, it looks pretty badass – and so would I, if equally liberated from the constraints of harsh reality. It's a cross between some sort of military stealth vehicle, a jacked-up sports pickup and some of the more evil-looking side-by-sides we've seen in recent times.

And the Cybertruck, of course; any off-roader with sharp angles from now on will be seen as an homage to Tesla's low-poly bare-metal beast – although there probably won't be a ton of things hitting the road with these future-flat windscreens, once people get a good look at how comically cumbersome the wipers need to be.