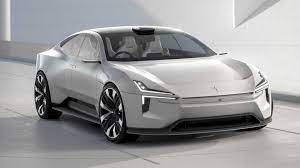 Polestar has had an interesting past. Founded in 1996 to build entrants in the Swedish Touring Car Championship, Polestar eventually became Volvo's official performance partner in 2011. Volvo Cars, itself owned by the Chinese company Geely, fully acquired Polestar in 2015, spinning it off into its own brand that builds EVs and plug-in hybrids using existing Volvo platforms and powertrains.

Polestar's position as a former motorsports company turned tuning house doesn't really jive with its current product lineup, though. As nice as the Polestar 1 grand touring coupe and Polestar 2 five-door crossover are, they don't exactly tango with racing cars in terms of driving excitement. Adding to the young brand's identity crisis, Volvo announced that its entire lineup would be free of internal combustion by 2030. What's the point of an electrified car wearing relatively unknown branding, especially if its much more established corporate partner is also planning on a lineup consisting only of EVs?