> Snowbot S1 could be your own snow-blowing robot - pirateswithoutborders.com

Snowbot S1 could be your own snow-blowing robot 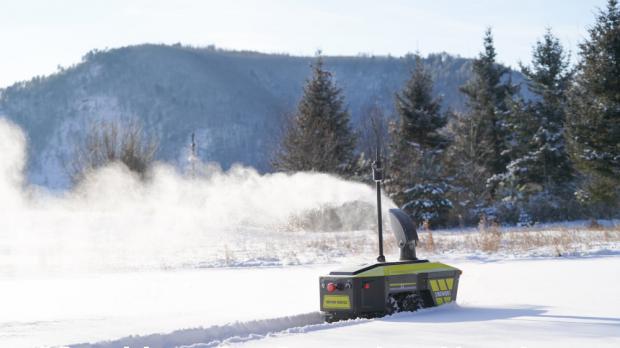 That's where the Snowbot S1 comes in – it's a snow-blowing robot that's designed to do the job all on its own.

Not related to the prototype SnowBot that we covered in 2019, the Snowbot S1 is a battery-powered, rubber-tracked autonomous vehicle which is about to enter the beta testing phase. Although you could use it on your sidewalk, it's intended more for large spaces such as parking lots.

Users start by setting up three ultra-wideband radio beacon poles, one at each of three corners of the square or rectangular area in question. A fourth pole on the robot receives signals emitted by those beacons, and uses them to triangulate its current location within that area. This allows it to establish a snow-clearing route, which it dutifully follows.

If the area is irregularly shaped, users can utilize an iOS/Android app to manually set the route. It's also possible to manually control the S1 in real time, using an included radio remote control unit.

Depending on whether the robot is moving over a paved or gravel surface, the snow is initially removed by either a scraper or a rotating brush. A hard rubber auger then channels the snow out of the 360-degree adjustable-angle chute. The S1 is reportedly capable of throwing snow up to a distance of 12 feet (3.7 m), and can remove snow up to 12 inches deep (305 mm). It automatically adjusts its speed from 0 to 1.3 feet (0.4 m) per second, depending on the depth of the snow.

Utilizing LiDAR sensors, the robot is claimed to be capable of detecting obstacles, and will automatically stop and sound an audible alert if any are in its path. It will also stop if its auger gets clogged with wet snow, branches or other debris. One 2-hour charge of its 36V/31.2-Ah lithium-ion battery is said to be good for about 1.5 hours of use. The whole rig weighs approximately 143 lb (65 kg) and is IP35 waterproof, meaning it's protected from low-pressure jets of water from any direction.