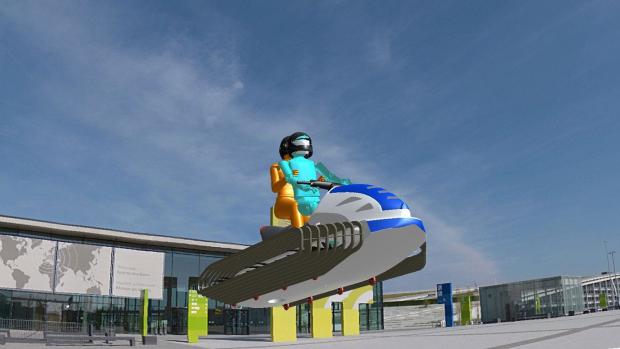 To understand how this Blainjett propulsion system works – and before anyone asks, no, these guys are no relation to me – you first need to understand how the swashplate and cyclic controls work to distribute thrust as a helicopter's top rotor spins. Each blade can vary its pitch independently, with the height of the swashplate determining the pitch. With the swashplate sitting flat, pushing the whole thing up and down will change the pitch of all the blades at once.

But with the cyclic control, helicopter pilots are able to tilt the swashplate. Pushing the stick forward, for example, tilts it such that the blades gradually tilt as they spin around, getting flatter as they pass the front of the aircraft, then pitching up to develop more lift as they go around the back. The result is an asymmetry in lift, with more at the back of the disc, and the aircraft pitches forward and accelerates in that direction. The cyclic control can do this in any direction; it's part of what makes helicopters such dynamic aircraft.

Blainjett calls its innovation "dynamic variable pitch," and what it effectively does is split the swashplate so that it operates in two halves. The swashplate still tilts as per normal in response to cyclic inputs, but this system lets you additionally push half of the swashplate higher or lower than the other half. A flexible cam made out of flex-steel and two linkages let the pitch controls move smoothly between the two levels as they rotate.

Why? Well, originally the Blainjett system was designed to counter retreating blade stall. As a helicopter accelerates forward, an asymmetry of lift develops. As the top rotor blades spin around, they go toward the front of the aircraft on one side, and backwards on the other. At high speeds, this means the blades develop extra lift as they're going forward into the fast-moving airstream, and less lift as they're retreating backward with the airstream, and the final result is asymmetry of lift, leading to a speed limit beyond which the aircraft will tip over and plummet.