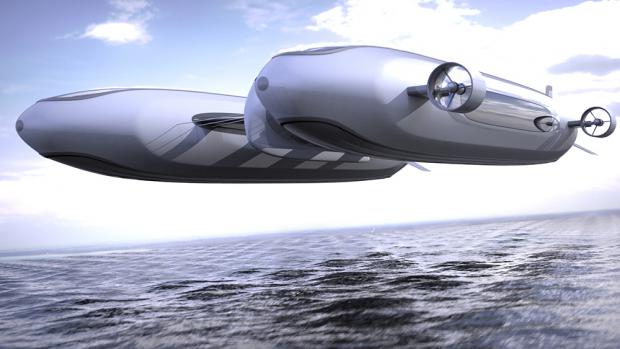 An Italian design firm has unveiled its latest luxury yacht – and it's designed to fly as well as sail the world's oceans.

The dry carbon fibre structure can reach 60 knots thanks to four solar-powered electric propellers and two helium-filled blimps, allowing it to fly, hover and float on the water too.

Air Yacht stays airborne because its blimps are inflated with a gas that is lighter than air – in this case helium – while it gets momentum from its massive propellers.

It's unclear how much Air Yacht would cost once it's been built, although the firm says it's designed with private owners in mind, likely those with several hundred million pounds to spare.

According to Lazzarini, the craft could fly at a maximum speed of 60 knots – nearly 70 miles per hour – for more than 48 hours.

'The Air Yacht is not an airship for public transportation or touristic purposes,' says Lazzarini Design Studio, which has posted the new renderings on its Instagram page.

'It is conceived for a private owner with a vision of mega yacht/aviation evolution.'