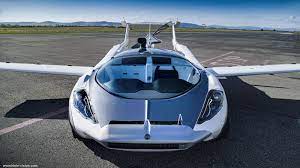 The dual-mode car-aircraft vehicle, which looks like a sports car, was created by a team of eight highly-skilled specialists at the Slovakian company Klein Vision, which was founded by Professor Stefan Klein.

Klein has devoted the last 20 years to making the flying car a reality.

It was awarded the certificate by the Slovak Transport Authority after successfully completing 70 hours of "rigorous flight testing compatible with European Aviation Safety Agency (EASA) standards," Klein Vision said in a statement (pdf).

Flight tests included over 200 takeoffs and landings and a full range of various flight and performance maneuvers that Klein Vision says demonstrated "astonishing static and dynamic stability in the aircraft mode."

The takeoff and landing procedures were achieved even without the pilot having to touch the flight controls, the company said.