> Transform Your Tesla Cybertruck Into An Amphibious Catamaran - pirateswithoutborders.com

Transform Your Tesla Cybertruck Into An Amphibious Catamaran 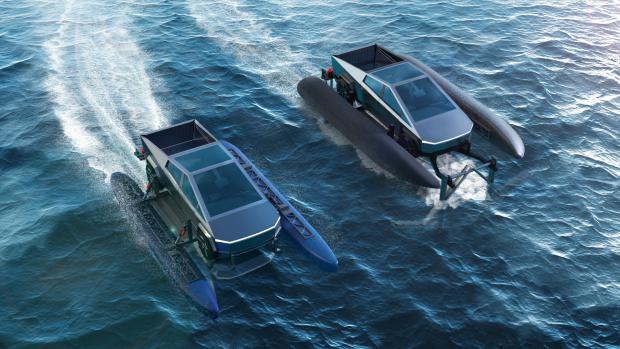 The Tesla Cybertruck has proven very popular across the globe. However, since it hasn't come to market yet, and it's been delayed a few times, people have made their own versions of the truck. In addition, many companies are banking on the Cybertruck's upcoming success, and have already started offering unique aftermarket products for the stainless-steel electric behemoth.

A company that appears to be named Cybercat shared the following information with us, and initially, we didn't think it was real. To be honest, it almost seemed as though Cybercat was mocking other aftermarket companies, and creating this hypothetical product and website as a joke. The company's email reads:

"Your Cybertruck has more versatility than you ever imagined. With its large battery, tough construction, and adaptive air suspension, the Cybertruck is just a few components away from transforming into a capable all-electric amphibious watercraft. ‍ Cybertruck + CATAMARAN => Cybercat TM."

Yes, it's an aftermarket kit that can convert your Tesla Cybertruck into a high-performance amphibious catamaran. And, yes, it appears to be real, at least in concept form, as there's a patent for it, and you can already place a reservation for it on the company's website.

The company is offering both the Cybercat and Cyberfoil. The Cybercat uses a few components to transform the electric pickup truck into a catamaran. The Cyberfoil takes it a step further by adding hydrofoils "to maximize efficiency on the water and unleash industry leading performance for all-electric watercraft."