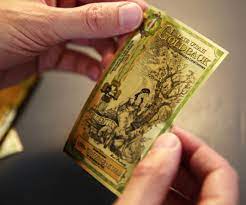 In 2019, Goldback president Jeremy Cordon said he had a dream in which he saw people paying for groceries using golden bills. Cordon had previously worked for years trying to make gold into functional money, but the dream gave him a new idea: What if a bill small enough to buy groceries could include a tiny percentage of gold?

"This felt like an epiphany because I saw people using gold as a regular money," he said. "This fit into the vision that anyone anywhere could use gold as their currency of choice."

For thousands of years, anyone who wanted to buy goods with gold faced "the small coin problem," Cordon told The Epoch Times. A 1-ounce gold coin, worth about $2,000, is far too expensive for everyday use, but a cheap gold coin is impractically small.