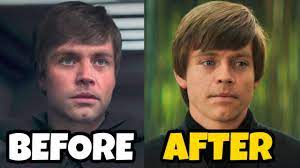 Deep Fakes and de-aging have been used in movies before. De-aging does not look as convincing.

Deep Fakes have been used around Youtube for short clips but this is using a high resolution for an hour-long TV show.

This shows that actors can be substituted for entire high-resolution movies. They can be made to look and sound convincingly younger or older. People can be substituted. Aliens who look more like any animal can be created.