> The biggest cruise ship in the world sets sail: - pirateswithoutborders.com

The biggest cruise ship in the world sets sail: 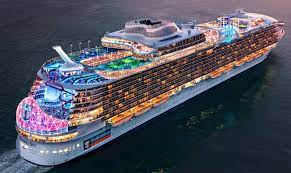 She is a true behemoth of the ocean; a city on water longer than the Shard is tall with her own Central Park, ice rink, casino, 19 swimming pools, 20 restaurants and 11 bars.

Weighing in at 236,857 tons – five times that of the Titanic – the Wonder of the Seas, the world's biggest cruise ship, set sail in spectacular style on Friday for her maiden seven-day voyage from Fort Lauderdale, Florida, to the Caribbean.