> New shock-absorbing material as strong as metal but light as foam - pirateswithoutborders.com 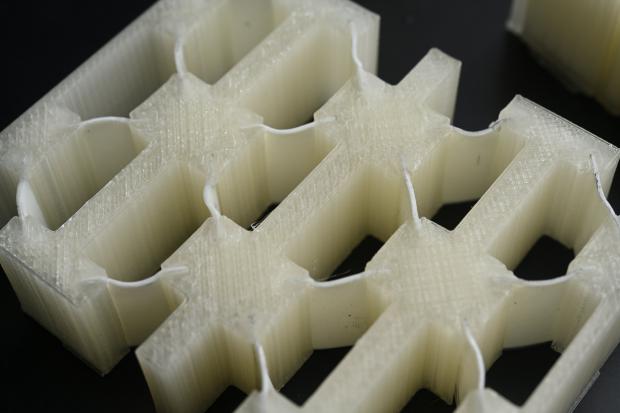 The stuff could make for helmets, armor and vehicle parts that are lighter, stronger and, importantly, reusable.

The key to the new material is what are known as liquid crystal elastomers (LCEs). These are networks of elastic polymers in a liquid crystalline phase that give them a useful combination of elasticity and stability. LCEs are normally used to make actuators and artificial muscles for robotics, but for the new study the researchers investigated the material's ability to absorb energy.

The team created materials that consisted of tilted beams of LCE, sandwiched between stiff supporting structures. This basic unit was repeated over the material in multiple layers, so that they would buckle at different rates on impact, dissipating the energy effectively.

In a series of experiments, the team tested how well the material could withstand impacts of different masses at different speeds. The materials were struck by objects weighing between 4 and 15 lb (1.8 and 6.8 kg) at speeds of up to 22 mph (35.4 km/h) and, sure enough, they held up.

Perhaps unsurprisingly, the material performed better with more layers of the cells. A structure with four layers, for example, had almost double the energy absorption density of a single-layer structure.

While the materials were so far only tested with impacts up to 22 mph, the team says that they should be able to absorb impacts at higher speeds as well.

The researchers say that the material could be used to improve the safety of helmets, body armor, car bumpers and other parts of vehicles and aircraft, effectively dissipating energy from impacts while remaining lightweight.