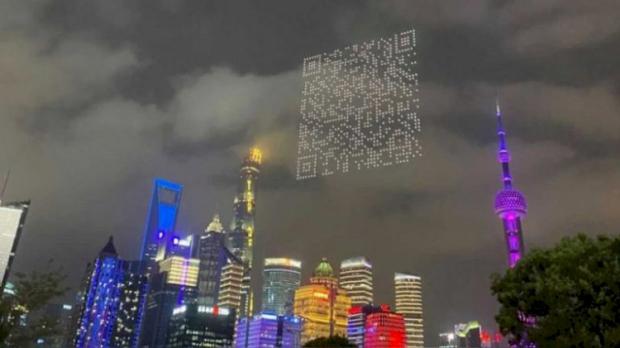 This is what an alien invasion from a marketing department looks like.

An eerie swarm of purple lights amassed in the skies over downtown Austin, Texas, Sunday evening.

Four hundred drones were suspended over the city during the South by Southwest festival to form a giant, hovering … QR code?

The dystopic-yet-impressive stunt came courtesy of Paramount+ to promote its upcoming sci-fi series Halo, based on the popular Xbox game about a warrior fighting off an alien invasion. The display was 300 feet tall (roughly the height of the Statue of Liberty) and 600 feet wide (almost two football fields). And, yes, the QR code was scannable, linking to a trailer for the series (below).

Locals on the Austin subreddit had plenty of thoughts. "This is obviously a sign of the apocalypse," wrote one. "The day I look up to the night sky and see a fucking ad is the day you should just shoot me right there," penned another. "I saw it and got scared and ran inside," wrote another.

There were positive responses, too: "Damn that's genuinely so cool," opined one user. "Smart idea—get your message out to the people who don't give any fucks to actually get anywhere near [downtown, where South by Southwest was held]. I, for one, am interested in this."