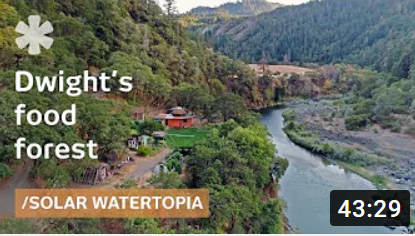 Dwight Streamfellow was a college junior when he bought a piece of cheap river-front land to start a homestead. He was a city boy (partly in Washington DC where his father was a Republican senator) so he planned to learn-by-doing on how raw land in the rugged mountains of Northern California's Six Rivers National Forest.

The property cost him only $11,000 back in 1976, but soon he had built his own home (much of it with hand tools) and was growing his own food, pumping water from the river to irrigate his garden & orchard, and powering his homestead with photovoltaic and firewood (for heat and his hot tub/bathtub).