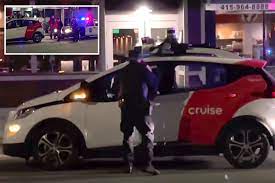 The officer attempts to open the driver's door, evidently shocked that there wasn't anyone inside the car

When he walks back to the police car, the Cruise car drives off further down the road and it is once again pulled over

Cruise, a General Motors subsidiary that introduced the driverless cars earlier this year in San Francisco, said they were contacted by police