Large Hadron Collider restarts to push physics to the edge 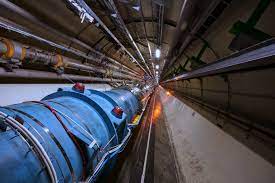 Scientists overseeing the largest particle accelerator on Earth switched it on for the first time in three years this weekend to solve some of the biggest mysteries in physics.

The Large Hadron Collider (LHC), the powerful particle accelerator located at CERN near Geneva, Switzerland, restarted on Friday (April 22) after a three-year shutdown for maintenance and upgrades. The reactivation kicked off what scientists call Run 3, the LHC's third science run, which will perform experiments through 2024.

"The machines and facilities underwent major upgrades during the second long shutdown of CERN's accelerator complex," Mike Lamont, CERN's Director for Accelerators and Technology, said in a statement Friday. "The LHC itself has undergone an extensive consolidation programme and will now operate at an even higher energy and, thanks to major improvements in the injector complex, it will deliver significantly more data to the upgraded LHC experiments." Those experiments will build on LHC's discoveries during its Run 1 (2009-2013) and Run 2 (2015-2018).

"These beams circulated at injection energy and contained a relatively small number of protons. High-intensity, high-energy collisions are a couple of months away," said Rhodri Jones, who leads CERN's Beams department, in the statement.  "But first beams represent the successful restart of the accelerator after all the hard work of the long shutdown."

LHC's three-year shutdown allowed scientists to make substantial upgrades to four key experiments on the particle accelerator. It's ATLAS and CMS detectors detectors alone will receive more particle collisions than the past two runs combined, according to CERN. ATLAS (short for A Toroidal LHC Apparatus) detects the tiny subatomic fragments from particle collisions and is used to hunt for the Higgs Boson, dark matter and extra dimensions. CMS (short for Compact Muon Solenoid) is a general-purpose detector that uses different systems for observations similar to ATLAS.