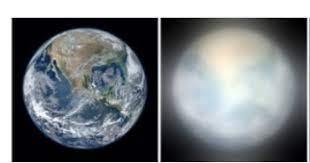 At optical or near-optical wavelengths, the amplification of light is on the order of 200 billion times and with equally impressive angular resolution. If we can reach this region beginning at 550 AU from the Sun, we can perform direct imaging of exoplanets. An imaging mission is challenging but feasible, using technologies that are either already available or in active development. Under realistic conditions, megapixel imaging of Earth-like exoplanets in our galactic neighborhood requires only weeks or months of integration time, not years as previously thought.

The team has been investigating sending one meter telescopes out about twenty times further than Pluto to use the gravity of the sun bending light. The sun is 865000 miles across which is 109 times wider than the earth. The gravity lets you leverage the sun as a giant light collector.

A mission that begins its imaging campaign at 650 AU would thus benefit from the increasing SNR as it progresses to larger heliocentric distances. This would allow such a mission to gradually improve its resolution, while keeping integration times sufficiently short to study temporally varying effects, such a diurnal rotation.