> Ultra-thin speakers roll out like wallpaper for sound-blasting surfaces - pirateswithoutborders.com

Ultra-thin speakers roll out like wallpaper for sound-blasting surfaces 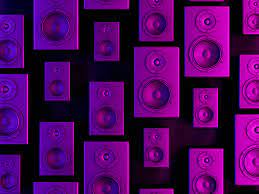 In a basic sense, speakers work by vibrating a membrane, which manipulates the air above it to produce sound waves. In speakers commonly found in audio systems or headphones, that's done using electrical currents and magnetic fields.

But in recent years scientists have developed ways to achieve similar results in much slimmer devices. Thin film speakers work using piezoelectric materials, which vibrate in response to the application of a voltage. These have been used in phones and TVs, and even experimentally to create speakers out of things as unusual as flags.

The problem is, these thin speakers need to either be free-standing or have some separation from another surface – mounting them reduces their ability to vibrate and produce sound. But in the new study, the MIT researchers redesigned thin speakers so they could be mounted on various surfaces.

Instead of having the whole surface of the membrane vibrate, the team formed the material into a grid of raised domes, which vibrate independently of each other. This is done by sandwiching a thin layer of a piezoelectric material, just 8 micrometers thick, between two layers of PET plastic. One PET layer has a grid of tiny holes, through which the piezoelectric material protrudes. The lower PET layer protects the membrane and allows the speaker to be mounted to a surface.

"This is a very simple, straightforward process," said Jinchi Han, lead author of the study. "It would allow us to produce these loudspeakers in a high-throughput fashion if we integrate it with a roll-to-roll process in the future. That means it could be fabricated in large amounts, like wallpaper to cover walls, cars, or aircraft interiors."