> Record-breaking camera keeps everything between 3 cm and 1.7 km in focus - pirateswithoutborders.com

Record-breaking camera keeps everything between 3 cm and 1.7 km in focus 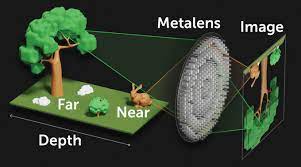 A shallow depth of field, for example, would keep the subject sharp but blur out much of the foreground and background. Now, researchers at the National Institute of Standards and Technology have taken inspiration from ancient trilobytes to demonstrate a new light field camera with the deepest depth of field ever recorded.

Trilobytes swarmed the oceans about half a billion years ago, distant cousins of today's horseshoe crabs. Their visual systems were quite complex, including compound eyes, featuring anywhere between tens and thousands of tiny independent units, each with its own cornea, lens and photoreceptor cells.

One trilobyte in particular, Dalmanitina socialis, captured the attention of NIST researchers due to its unique compound eye structure. Fossil record examination indicates that this little guy had double-layer lenses throughout its visual system, unlike anything else in today's arthropod kingdom, and that the upper layers of these lenses had a bulge in the middle that created a second point of focus. That meant Dalmanitina socialis was able to focus both on the prey right in front of it and the predators that might be approaching from farther off.