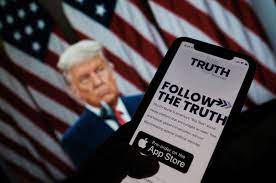 Former President Donald Trump's media company has begun hiring staff for its video streaming platform as it seeks to build a MAGA challenger to mainstream providers such as Netflix, Hulu and Disney+.

In recruitment adverts posted on Wednesday, the Trump Media and Technology Group announced it was seeking a content buyer and a development manager to create programming for its TMTG+ service.

The service is part of Trump's attempt to build an alternative media ecosystem after being kicked off Facebook and YouTube in the wake of the January 6 violence last year.

But his Truth Social challenger to Twitter has struggled to gain purchase since being launched, and has seen downloads plummet.

It is still not available on phones running Android software.

The advert suggests TMTG+ will offer a wide range of programs - some original and some bought in - much like other existing platforms.

'In addition to the social media platform Truth Social, our SVOD platform TMTG+ will be the home for a wide variety of non-scripted, scripted, and original content.'

The content development manager will work on development, casting and pilots.

'Our ideal candidate will be able to establish priorities and multi-task efficiently within a fast-paced environment while meeting strict deadlines.'

Little more is known about the platforms plans, such as launch date or planned titles.

A request for more information was not immediately answered by TMTG.