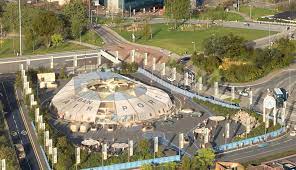 Once known as Britain's motor city, the settlement of about 400,000 people in England's Midlands has been left struggling for an identity by decades of slumping auto output that followed widespread destruction from World War II bombing.

This spring, however, Coventry is once again at the forefront of world-leading innovation in personal mobility as it hosts what's billed as the first-ever fully functional hub for flying taxis, the electric-powered vertical takeoff and landing craft that backers are talking up as the biggest new thing in aviation.

The site is fully functional, that is, apart from the air taxis themselves. With the scores of proposed eVTOL models yet to win regulatory signoff, unmanned drones are standing in for the typically five-person craft during three weeks of demonstration flights in Coventry.

Everything else, though, is just as it will be when the first flying cabs come to market in a few years' time, according to the hub's developer, Urban-Air Port Ltd., a London-based startup that's leading the push to develop so-called vertiports in competition with UK rival Skyports Ltd.

"We're here to show everyone what the future is going to look like," Urban-Air Port founder and executive chairman Ricky Sandhu said in an interview. "There's no point having new technology if people don't believe in it."