> Get Ready to Be Muzzled: The Coming War on So-Called Hate Speech - pirateswithoutborders.com 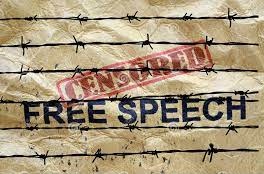 "Whoever would overthrow the liberty of a nation must begin by subduing the freedom of speech."—Benjamin Franklin

Beware of those who want to monitor, muzzle, catalogue and censor speech.

Especially be on your guard when the reasons given for limiting your freedoms end up expanding the government's powers.

In the wake of a mass shooting in Buffalo, NY, carried out by an 18-year-old gunman in military gear allegedly motivated by fears that the white race is in danger of being replaced, there have been renewed calls for social media monitoring, censorship of flagged content that could be construed as dangerous or hateful, and limitations on free speech activities, particularly online.

As expected, those who want safety at all costs will clamor for more gun control measures (if not at an outright ban on weapons for non-military, non-police personnel), widespread mental health screening of the general population and greater scrutiny of military veterans, more threat assessments and behavioral sensing warnings, more surveillance cameras with facial recognition capabilities, more "See Something, Say Something" programs aimed at turning Americans into snitches and spies, more metal detectors and whole-body imaging devices at soft targets, more roaming squads of militarized police empowered to do random bag searches, more fusion centers to centralize and disseminate information to law enforcement agencies, and more surveillance of what Americans say and do, where they go, what they buy and how they spend their time.

All of these measures play into the government's hands.