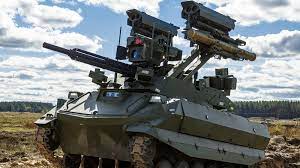 Vladimir Putin has finally deployed his 'Terminator' military vehicles in battle in Ukraine as Kyiv continues to obliterate invading Russian tanks with the help of British missiles.

Video shows the much-vaunted armoured vehicles, which are designed to support infantry units fighting in urban areas, in the Donbas region in eastern Ukraine.

The deployment of the BMPT Terminator comes as Russia's invasion of Ukraine has taken a heavy toll on Putin's main army tanks - the T-90M tank - after Ukrainian troops continue to obliterate them with rockets.

Elsewhere today, the surrendered heroes of Mariupol have been taken to a Russian 'concentration camp' as fears grow for their safety, while Putin has continued to suffer blows with the loss of a further colonel, while a soldier has become the first to plead guilty to war crimes.'

In an effort to bolster Russia's arsenal, a platoon of Terminator military vehicles were deployed and used for the first time in battle in the Donbas.

The BMPTs - or tank support combat vehicles as they are designated - were seen near Severodonetsk in Luhansk region.