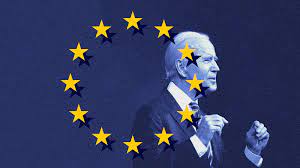 What is Biden to do? From within his Democratic Party, the message is increasingly put out that Biden should not seek reelection in 2024.

Suppose Biden takes that advice and announces he will not seek a second term. What will he do then? He has been in political office nearly nonstop since joining the United States Senate in 1973 at the age of 30 — the minimum age required under the US Constitution.

One option for the career politician who may not want to step away from the political power just yet is to look for opportunity in Europe. Less than 4 in 10 Americans polled say they support Biden, and a majority disapprove. In at least some countries in Europe, in contrast, polling suggests majority support for Biden.