> The Rise Of "Constitutional Carry" Is A Sign Of Failing Trust In Government - pirateswithoutborders.com 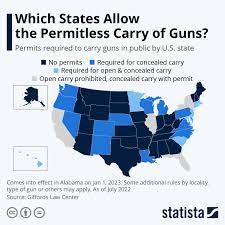 Alabama will soon join Indiana which in March of this year passed a new statute allowing permitless concealed carry in that state—sometimes called "constitutional carry." In 2021 alone, at least six states passed their own provisions legalizing permitless concealed carry: Arkansas, Iowa, Montana, Tennessee, Texas, and Utah. Essentially, any law-abiding citizen over a certain age (usually 18 or 21 years of age) can now carry a concealed firearm in these states. 20 years ago, only Vermont allowed unrestricted concealed carry. Beginning ten years ago, however, more than twenty states adopted new laws deregulating the carrying of firearms.

Why is this happening now? On its most simple level, these laws are passed because lawmakers and constituents at the state level have advocated for their passage. Moreover, whatever opposition has existed among interest groups and the public has been insufficient to block their passage.