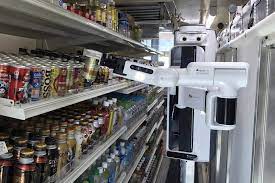 Telexistence Inc. and FamilyMart Co. are rolling out a fleet of AI-driven robots to restock shelves in 300 convenience stores across Japan.

The robot arms are designed to replenish drinks in refrigerators and are now in mass production, Tokyo-based Telexistence said in a statement Wednesday. They'll be installed in FamilyMart locations across major metropolitan areas later this month and help relieve store workers while also filling the void left by a shrinking workforce in the country.

Dubbed TX SCARA — standing for Selective Compliance Assembly Robot Arm — the machines are largely autonomous, with remote piloting as a fallback option should the artificial intelligence fail or encounter out-of-place items. Each unit can replace one to three hours of human work per day per store, Telexistence said.