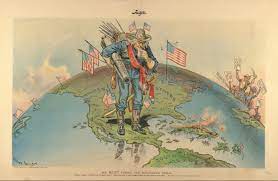 In stark contrast to earlier hegemons on the world stage, the empire of lies and mass deception operates globally with super-weapons able to destroy planet earth and all its life forms.

While risking nuclear war with Russia and China, it's pushing unparalleled genocide to eliminate unwanted millions and billions of people by kill shots at home and worldwide.

Coming to a neighborhood near you and your own, the great reset aims to more greatly enrich the privileged few by transferring maximum wealth from ordinary people to them.

It's part of a diabolical scheme to transform the world community of nations into ruler/serf societies.

It's a depopulation scheme to eliminate the unwanted by kill shots, wars, starvation and other diabolical tactics.

It's a dystopian nightmare wrapped in deceptive socioeconomic mumbo jumbo.

"Both are the refuge of political and economic opportunists" — serving special interests and their own.

Britain is the first nation to approve a new Moderna kill shot — what's crucial to shun.

Phony claims of its safety and effectiveness are similar to earlier approved kill shots.

Irreparable harm to countless millions throughout the US/West and elsewhere revealed a worlds apart reality.

Most everything approved by the Pharma-controlled FDA and CDC are automatically suspect.

"An adequate test of a (new) drug (like Moderna's) should go on for 10 years at least" before approval or rejection.

The company's "current (flu)covid booster jab has been given to 9.4 million people."

"If the new jab is now given to, say 10 million people (with scant testing of far too few people), there could be 10,000 deaths within five seconds if my fearful scenario were to be fulfilled."

"(T)he conspirators and their bought and paid for collaborators will doubtless now do more killing and maiming."

"The medical (and nursing) profession care only about their massive pay demands."

"They don't seem to give a damn about patients."

In cahoots with the US war department, HHS agreed to buy "66 million doses of Moderna's (new) bivalent (kill shot) booster for potential (sic) use in the fall and winter."

It's "in addition to 105 million doses" of Pfizer's bivalent entry for mass-jabbing with health-destroying toxins.

And this NYT rubbish on new bivalent kill shots:

Saying they'll protect against "the original virus and (more scariant then variant) omicron" ignored the following like earlier.

Not a dime's worth of difference separates one from others.

Claims made about all brands of kill shots were fabricated to mind-manipulate maximum numbers of people to unwittingly self-inflict harm.

Since health-destroying mass-jabbing began in December 2020, millions of healthcare professionals throughout the US/West were sacked for refusing to go along with what causes irreparable harm on the phony pretext of protecting what's too precious to lose.

Dedicated to "honest healthcare solutions," to medicine as it should be practiced, co-founder of America's Frontline Doctors (AFD), Simone Gold MD JD, was falsely arrested on January 6, 2021.

She and others were wrongfully accused entering a "restricted building" on Capitol Hill, as well as for "violent entry and disorderly conduct (sic)."

Their police state mistreatment was for the "crime" of exercising their First Amendment rights of "freedom of speech…(to) peaceably assemble, and…petition the government for redress of grievances."

Events of that day were planned by undemocratic Dems, an anti-Trump false flag that preceded ascension to power of unelected Biden/Harris on January 20, 2021.

Gold had nothing to do Dem-sponsored violence.

In June, she was unconstitutionally sentenced to two months imprisonment — to intimidate and silence her.

On Monday, she was able to issue the following statement by email, saying:

"I remain in this Miami prison, serving time for a bogus trespassing charge."

Limited to 15-minute computer time sessions, she expressed gratitude for countless letters of support and prayers on her behalf, adding:

"Even the prison staff noted the volume of supportive mail."

"I am both humbled and strengthened. Thank you!"

"All incoming female inmates are put into a punishment isolation cell under the guise of a 'quarantine.' "

"They told me it wasn't for punishment, but it was certainly a punishing and inhumane experience."

"Another form of arbitrary punishment is moving me, along with other inmates, to new cells with no notice."

"A guard simply yells my name, and I'm expected to move at any moment."

"My staff knows that if I stop emailing or calling, it's because they  moved me or possibly put me back into isolation."

"I've noticed activity in the prison that makes me fearful for my own safety."

"My spirits are high. I am more determined than ever to keep fighting for you and medical freedom."

Along with unjustifiable prison time, Gold faces 12 months of supervised release and was fined $9,500.

Because of her activism for healthcare as it should be and opposition to toxic kill shots, Gold will remain vulnerable to rearrest on fabricated charges — and perhaps imprisonment longer-term ahead.

Separately as reported by the Epoch Times:

What's going on is "horrific, and they're all in lockstep" with each other.

Unwilling to go along with the health-destroying system, she "left the hospital system" involved in harming patients instead of aiding their recovery "to start her own early treatment private practice," saying:

"They will not consider protocols outside of what's given to them by the (Pharma-controlled) CDC and NIH. And nobody is asking why," adding:

"I've seen people die with their family watching via iPad on facetime. It was brutal."

As a former intensive care nurse, she often saw tragedy on the job.

Grievous mistreatment of flu/covid patients "had (her) waking up in the middle of the night in a cold sweat with chest pains."

"I hated going to work."

"I was stressed in a way I've never been before in my entire life."

As explained before in my writing, jabbed individuals comprise the vast majority of flu/covid outbreaks, along with one or a combination of other serious illnesses, including heart disease and cancer.

All things flu/covid is the mother of all state-sponsored, MSM supported, scams — with mass-extermination and elimination of what little remains of greatly eroded freedoms in mind.

That's the dismal state of things throughout the US/West and elsewhere.

Largely in the eye of the storm at this time, the worst of things likely lies ahead.