> Three Eras of Machine Learning and Predicting the Future of AI - pirateswithoutborders.com 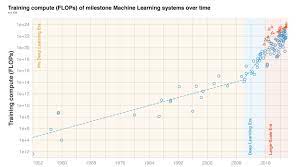 They show :
before 2010 training compute grew in line with Moore's law, doubling roughly every 20 months.

Deep Learning started in the early 2010s and the scaling of training compute has accelerated, doubling approximately every 6 months.

In late 2015, a new trend emerged as firms developed large-scale ML models with 10 to 100-fold larger requirements in training compute.

Based on these observations they split the history of compute in ML into three eras: the Pre Deep Learning Era, the Deep Learning Era and the Large-Scale Era . Overall, the work highlights the fast-growing compute requirements for training advanced ML systems.

They have detailed investigation into the compute demand of milestone ML models over time. They make the following contributions:
1. They curate a dataset of 123 milestone Machine Learning systems, annotated with the compute it took to train them.