> Alex Jones said he may have to plead the Fifth as he is set to testify in Sandy Hook trial - pirateswithoutborders.com 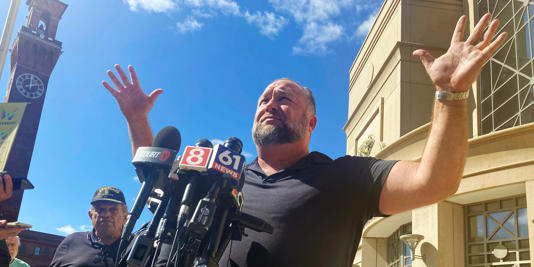 -Alex Jones is set to testify in his damages trial for claims the Sandy Hook shooting was a hoax.

-On his way into court, Jones said Thursday that he may have to plead the Fifth.

Alex Jones told reporters he may invoke the Fifth Amendment as he headed into a Connecticut court Thursday where he was expected to testify in a trial over how much in damages he must pay Sandy Hook families.

"I'm probably going to have to take the Fifth, not because I've done anything wrong but because she's saying she'll fine me or put me in jail if I answer these questions truthfully. It's a trap,'" Jones said before entering court.

The trial will determine how much Jones must pay the families of victims who died in the 2012 shooting and who he was previously found liable of defaming by theorizing that the massacre was a "hoax."