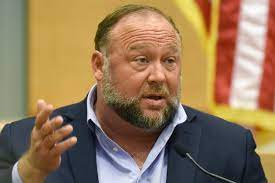 Infowars founder Alex Jones lashed out as he testified in a tense Connecticut courtroom Thursday as part of a defamation trial that will determine how much he should pay to the relatives of victims of the 2012 Sandy Hook elementary school massacre.

The far-right conspiracy theorist and host, known for emotional outbursts on his shows, appeared frustrated at several points and said he would not make further apologies for popularizing the false claim that the shooting in Newtown, Conn., was a hoax.

"Is this a struggle session? Are we in China?" Jones asked, referring to Maoist rallies where people were publicly humiliated, after an attorney for the plaintiffs, Chris Mattei, pointed out the victims' family members in the courtroom. "I've already said I'm sorry hundreds of times, and I'm done saying I'm sorry."