> Easier and Safer to Use Carbon Nanotubes in Polymer Nanocomposite - pirateswithoutborders.com 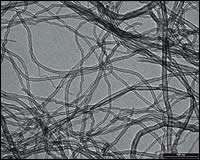 The method is reported in Carbon and involves making briquettes — dense packages of carbon nanotube powders. Nanocomposites made with briquettes perform equally well as those made from the more expensive masterbatches, which are also polymer-specific — that is, less versatile.

"We believe the use of dense briquettes of carbon nanotubes can significantly facilitate the development of the carbon nanotube composite industry. This technique is cheap and applicable to a broad variety of polymer matrices, without sacrificing any of the electrical and thermal properties of the final material," the lead author of the study, Skoltech PhD student Hassaan Butt, stated.

In the last decades, carbon nanotubes have been intensively investigated by researchers from academia and the industry because of their unique combination of electrical, thermal, and mechanical properties. Meanwhile, polymer-based nanocomposites have come to be the largest carbon nanotube application and the one closest to widespread integration into everyday life. It is easy to understand why: The smallest amounts of nanotubes added to a polymer endow the material with fundamentally new properties, such as electrical conductivity and piezoresistivity, as well as crucially enhancing its thermal and mechanical properties.

The recent study in Carbon began as an attempt to address the challenge of achieving sufficient carbon nanotube dispersion within a host polymer to attain optimal composite properties. To this end, Skoltech researchers and their collaborators from Kurnakov Institute investigated the method for rapid expansion of supercritical solution (RESS) of nanotubes, which leads to their deagglomeration. However, it did not yield any improvements in the ultimate properties of polymer nanocomposites. The team decided to explore the implications of this from the opposite perspective.