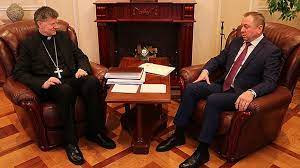 The foreign minister of Russian ally Belarus died suddenly today at the age of 64, it was announced in Minsk.

Vladimir Makei was seen as the only main channel of communication to the West in dictator Alexander Lukashenko's hardline pro-Moscow regime.

His sudden death came the day after he met with the Pope's envoy Ante Jozi? amid speculation they were discussing a secret peace plan over the war in Ukraine.