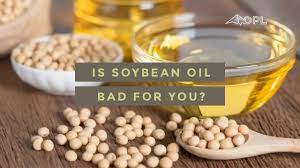 The animal study compared the health effects of diets high in conventional soybean oil, GE soybean oil low in linoleic acid and coconut oil. Both types of soybean oil had pronounced effects on the brain

The soybean diets caused dysfunction in about 100 different genes in the hypothalamus, including one that is responsible for producing oxytocin, which has beneficial effects on your heart

Potential health hazards of soybean oil include the harmful health effects of unfermented soy, the potential hazards of GE soy, the harm associated with glyphosate-contaminated food, and high amounts of processed omega-6 skewing your omega-3 to omega-6 ratio

Far worse than the biologic damage caused by refined sugar is the molecular havoc caused by processed vegetable oils. Soybean oil in particular has a questionable safety profile for several reasons, and processed foods are positively loaded with it.