> The Navy is using solar-powered drone boats as scouts in the Persian Gulf - pirateswithoutborders.com 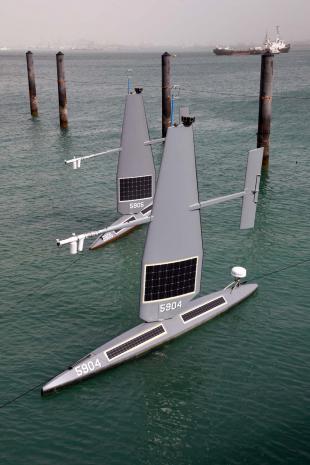 From January 6 through 9, in the Persian Gulf, the US Navy conducted an exercise in which two Saildrone robotic boats communicated with the USS Delbert D. Black, a destroyer. The exercise used robots, AI, and a crewed ship to scout the environment around them, a practical peacetime use of the robot that could inform how these tools are used in war.

"During the exercise, unmanned and artificial intelligence systems operated in conjunction with Delbert D. Black and CTF [Coalition Task Force] Sentinel's command center ashore in Bahrain. The systems were able to help locate and identify objects in nearby waters and relay visual depictions to watchstanders," the US Navy said in a release.

This isn't the first time the Navy has used Saildrones in these waters. In August 2022, a ship from the US Coast Guard and a ship from the Royal Bahrain Naval Force worked alongside a Saildrone, integrating the robot's sensors into the mission. And in September 2022, while Navy Saildrones were operating in the Persian Gulf, Iran's Navy temporarily seized and held the robots before returning them to the US Navy, a return facilitated by the USS Delbert D. Black.

Robots at sea can see

So what kind of information or images might the robots capture that's so valuable to the Navy? A pair of images released by the service branch offer some detail. In one, Lieutenant Richard Rodriguez, aboard the Delbert D. Black, watches images sent from the sea-going drone to a monitor. The Saildrone's information is viewed through a Mission Portal dashboard displayed in Chrome. The robot's camera tracks the horizon at an angle, and against it are three marker rectangles, showing possible ship sightings.