Can a computer write a script? Machine learning goes Hollywood 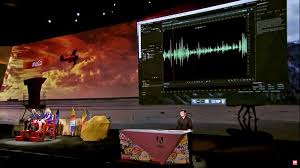 Macdonald directed a 60-second Lexus sedan commercial using artificial intelligence that relied on tech giant IBM's platform, Watson. The computer produced a script featuring a sentient-like Lexus ES that hits the open road, whizzing by stunning vistas of shoreline and forests before saving itself from a dramatic crash.

"I thought this was something amazing that had all these ambiguities in it and strangeness in it," Macdonald said. "It's only a matter of time where the formula of what makes up a great story, a great character can be learned by a computer."

It may sound like science fiction, but the idea of using computers to help write scripts and other tasks is gaining serious traction in Hollywood. Machine learning — where computers use algorithms to sift through large amounts of data and often make recommendations — is infiltrating all corners of the industry. Entertainment companies are using the technology to color-correct scenes, identify popular themes in book adaptations and craft successful marketing campaigns. Even talent agencies are harnessing the technology for suggestions on how to market their stars.

"These are tools that enable us to make smarter decisions," said Kenneth Williams, executive director of the Entertainment Technology Center at USC.