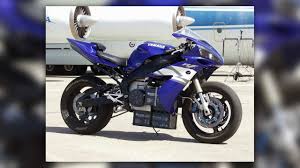 Though the options on the electric motorcycle market have become substantially more attractive in the last couple months alone, the existing range of production models is still fairly limited. So instead of waiting for their favorite marque to introduce an electric model of their liking, a handful of EV-minded moto-enthusiasts have opted to create their own proton and electron-powered versions of factory models, build electric-powered customs, or start their own company all together.

While it may look to be on the primitive side, this is the very machine that started Lightning Motorcycles. The bike was an old, abused 1999 Yamaha R1 that'd had its liter-sized inline four swapped out in 2007 for 28 90 amp-hour, 3.2 volt, 6.6 pound Lithium Iron Phosphate batteries and a 550amp 84V AC inductance system. The prototype was said to be good for more than 60 ponies and almost 70ft-lbs of torque. The 400lb protobike's top-speed was only 100mph, while the claimed range was 80-miles at a 65mph cruising speed after a seven-hour charge.