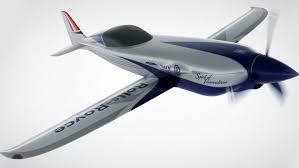 Scheduled to fly in 2020, the zero-emission electric speedster is being developed as part of the Accelerating the Electrification of Flight (ACCEL) and is billed as a leader of the "third wave" of aviation.

Gloucestershire airport outside of Cheltenham, England may seem like just another provincial airfield, but it's the base for an attempt by engineers, designers, and data specialists from Roll-Royce, electric motor and controller manufacturer YASA and the aviation start-up Electroflight to create a single-seater prop-plane that will take electric aircraft to a whole new level.

Partly funded by the British government, ACCEL draws on Formula Eexpertise in an effort to build an electric aircraft that tops out at over 300 mph to set a new e-plane record, and potentially one day even exceed the 1931 Schneider Trophy record set by a Supermarine S.6B that used a Rolls-Royce "R" engine to reach 343 mph (552 km/h) in 1931.